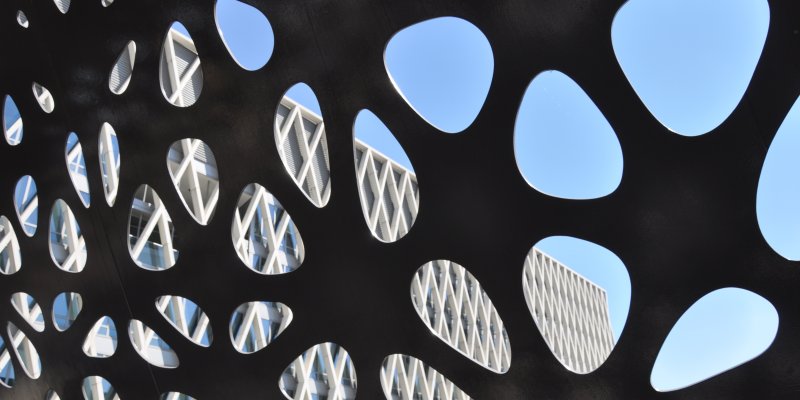 Over the last decades, the once abandoned and deserted historic harbour in the north of Antwerp, has been transformed into a bustling city hotspot. With Manuel De Sola Morales’ master plan from the 1990s as a basis, a process of ‘slow urbanism’ meant that plans could be adjusted to incorporate new developments and requirements.

Since 2011, the museum MAS links the historic city centre with this open urban area where living, working, entertainment and culture go hand in hand. The Port Authority Building (Dutch: Havenhuis), a landmark designed by Iraqi-British architect Zaha Hadid, opened in 2016 at the far end of the Kattendijk dock and marks the most northerly tip of current developments. The nearby Belvédère Park (2018) masks the raised quay walls and forms an hexagonal vantage point overlooking the river Scheldt.

The Cadix district, built to meet sustainability goals with new schools, day-care centres, shops and frequent public transport is very popular with young families. From here, a tunnel and a bridge specially designed for cyclists, take you straight into the new 24-hectare panoramic Park Spoor Noord. In 2009, this old and abandoned railway marshalling yard, surrounded by narrow streets and densely populated housing blocks, was successfully transformed into a garden for the local people, a park for the city. At its outer limit, modern high rises form a new hub with a campus, student housing, flats and a brand-new hospital.

The north of the city bursts with modern architecture and landscaping. Amidst these new developments the old docks and railway tracks are a reminder of Antwerp’s shipping history that give this area its distinct character.

Call or e-mail us for a detailed offer.