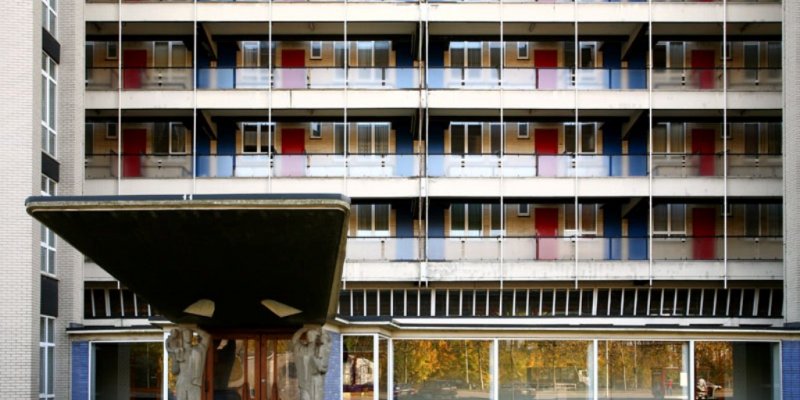 Social Housing in the South of Antwerp

After World War II, the city of Antwerp suffered from a severe housing shortage. The city council decided to make space at the Kiel and the Luchtbal areas available to three big construction companies. They had to provide cheap housing to counter the urban exodus. These operations gave the Kiel area with its more than 4000 social housing units its reputation of the social housing area par excellence.

In 1949, Renaat Braem was commissioned by Huisvesting Antwerpen to build 800 social housing units. For the first time he had the opportunity to put the ideas of CIAM (to which both Le Corbusier and Braem subscribed) into practice on a large scale. He designed an ensemble of three high-rise residential blocks, a zigzag series of six lower blocks and a half moon of low-rise buildings.

What made the blocks so unique in those days? Firstly there was the combination of functionality and aesthetics. Then there was the importance given to light, air and space. Quite unique was the conception of each apartment as a duplex, thus creating the illusion of privacy and of being in your own house.

During this walk we visit a model apartment where you will feel as if you are transported sixty years into the past. If possible, we will also visit the Nova meeting centre. Nova opened its doors in 1963 as a neighbourhood library and was intended for the “edification” of the people.

The tour takes 2 hours and includes a visit to the model apartment.